Does anyone think there will be a main antagonist in One Piece, like Pain in Naruto and Aizen in Bleach?
If there is, we will see him in The New World.

I'm pretty sure it will be Blackbeard. He intends to disrupt the balance of power by being a Shichibukai AND the Pirate King, (who is ahead of the Yonko on the pirate's side), and with that sort of strength, he would probably destroy the World Government too. He alone would rule the world. That, and Blackbeard has gone from a nothing to having a powerful position as a Shichibukai, as well as what's possibly the most powerful Devil Fruit of them all. He's made an enemy of Whitebeard, and I can see him even defeating Whitebeard later. Blackbeard is also the other side of the "D" coin, he is a darker "D" then all of them, an evil "D". He has been established as Luffy's foil, and I am sure that he will end up as the final enemy Luffy must face to become the Pirate King.

The main candidates for main villain are:

OP focuses a lot on there being multiple major forces against Luffy and his crew, so it could be that there IS no "main" antagonist, but it's up to the interpretation of the reader.

didnt u guys forgot about jinbei the fishboss whch is said to be the strongest shichibukai?

I think he wont be the main badguy but i see him beeing part of one of the last fights.

but i agree that blackbeard is the most dangerous enemy after all, even if we allready saw his power.

and btw its a power luffy could be able too beat unlike icemarine guy (forgot his name).

honestly take blackbeards gravitationforce and a gumo gumo gear 3rd bazooka, as stated he is vulnerable while in gravitation mode. this would lead in blachbeards total destruction... ithink this would be a big bloody mess -.- so i doubt that luffy will physicaly fight him... and even if it would be a short combat. once bb starts gravitation luffy goes gear 3rd and bazookas him away....

Impel Down said:
The main candidates for main villain are:

OP focuses a lot on there being multiple major forces against Luffy and his crew, so it could be that there IS no "main" antagonist, but it's up to the interpretation of the reader.
Click to expand...

I honestly cannot see Dragon as being a main villain. I can't even see him as a villain, he seems much more like an anti-hero to me. As for the Gorosei and Sengoku, they sort of go under the general category of "World Government" and I can see them being a huge factor in the final battle of the series, probably even the main opponents in that battle, but ultimately, I'm defining "chief antagonist" as "ultimate rival for the title of Pirate King and final enemy fought for the title of Pirate King", and that leaves Blackbeard. Whitebeard will probably be fought right before the final battle, but there will be a battle on Raftel, and it will come down to Luffy and Blackbeard, that I'm sure of.

I do agree that there are many antagonists of equal importance in One Piece, but I'm going by who's the biggest rival for the title of Pirate King, so Blackbeard is the answer. If I were to judge it by different criteria, I would probably pick a different person. 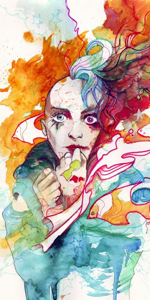 I agree on Blackbeard being the main antagonist too. Not yet perhaps, since Luffy doesn't even know anything about Blackbeard trying to be Pirate King or that he intended to take Luffy down. But in the end, as has been said, he will definitely be the main enemy.

As of now, who I think could be called a sort of antagonist is Smoker. He has been after Luffy since East Blue and is still chasing him, so let's not forget him.

Blackbear for me too.. He defeated Ace, so Luffy should have a personal grudge against him.. And he has the D., and argueably the potentialy strongest DF. I'm sure he will get the spot-light sometime soon.

and @ultrazai
Where was it stated the Jimbei is the strongest Shichibukai?

Oda has been building up the Blackbeard Pirates to be the antithesis of the Strawhats, so its quite obvious Blackbeard will be the final antagonist.

Notably, the BB pirates lack a swordsman. What I think will happen, is that whilst the Strawhats are engaging their respective opposites in the BB pirates (Luffy-BB, Chopper-DocQ, Lafitte-Sanji, Burgess-Franky, Usopp-VanAuger) Zoro would be fighting Mihawk in their final duel.

didnt u guys forgot about jinbei the fishboss whch is said to be the strongest shichibukai?

harro7 said:
didnt u guys forgot about jinbei the fishboss whch is said to be the strongest shichibukai?

None of what you said was true. He was just captain of a very strong pirate crew of Fishmen.

BB seemed to have the same deep beliefs in the Age of Dreams and destiny and other D-ish qualities that Luffy had, so I just can't see Luffy seeing him as a true major villain. In fact, Luffy doesn't really have any one person that he's angry with, just whoever happens to be doin' evil shit when he's around or hears about them.

Yes, Blackbeard has the same basic beliefs and qualities as Luffy, but due to his personality, they are darkened and twisted, establishing him as the perfect foil for Luffy. He is definitely the ultimate rival for the title of "Pirate King", and that's what One Piece is about. The World Government plot-lines are just there as excuses for adventures and an interesting world, and another, secondary foil to Luffy, but his primary foil IS Blackbeard. The World Government is like, halfway between Blackbeard, as the primary foil, and a secondary foil, which One Piece doesn't really have, most people are at the 1.5 mark.

The fact that BB has the same way of thinking and dreams are just making him more of a threat for Luffy's goal... They both seem to want to achieve the same goal, but each with a different way (one may say even opposite ways), so it's bound that they will have a confilct, which will probably make BB the main villian.

Why can't there be a Third major "D" who wants to be the Pirate King? If having the same morals would make you a threat, by that logic, another D would be a problem. And maybe that third D could have his eyes sent on maybe, taking over the world.

Dragon isn't a threat, because he does want to take over the world, but he doesn't care about being the Pirate King at all. Therefore, he is not an obstacle to Luffy's dream, and although he may have the same morals in a different way, he isn't portrayed as a foil to Luffy, and his dream isn't diametrically opposed to Luffy's, so Dragon doesn't qualify.

I agree with Imitorar.. Other than the fact that he IS luffy's dad, and already saved him from certain death, his goal doesn't interrupt luffy's. Pirate King doesn't control the world, he controls the seas.
You must log in or register to reply here.
Share:
Reddit Pinterest Tumblr WhatsApp Email Link
Top