I like this manga a lot. So I've decided to start a thread for this manga since MH still doesn't have one. This shonen manga is created by Tohru Fujisawa. This manga is very very popular. I mean aside from the manga, there is anime based on the manga and even a drama was made based on the manga! The popularity of this manga can rival even Naruto and One Piece.

The story is about an ex-biker/gangster/loser/playboy who has a goal to become the greatest teacher in japan. Given his background it is almost impossible for him to be a good teacher hence to even be employed as a teacher. He somehow managed to become a teacher(read the manga for further info

) and his first assignment is to take care of a 'problematic' class which is full of trouble makers. In order to gain respect from his student he uses many unconventional methods to deal with his students.

If you haven't read this manga, you should cuz it is one of THE BEST manga ever made! seriously! If you don't believe me try reading a few chapters. you won't be disappointed. 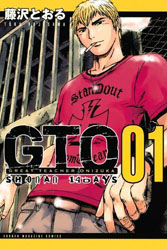 Follow the mysterious adventures of Eikichi Onizuka for 14 days when he returns in Shonan and faces misfit children of a juvenile care facility.
Last edited by a moderator: Nov 26, 2011

yep i wud agree with ya, this manga is definitely one of the top rankin/best manga ive ever seen

so read it ppl!

this manga can be pretty strange at times, but is still funnny as hell to read. It is one of the few mangas i have ever read to make me actually laugh out loud. I would reccomend this manga to anyone who hasnt read it and wants to see a classic. Also i suject seeing the anime, just as funny, and good voice acting. 9/10 stars ^0^

This manga is not just funny, it is can also be heart warming since it teaches a bit about human compassion, the reality of life and also friendship.

I agree GTO is a must read, i rate him 9/10 too(i only rate Berserk 10/10), this manga is great and isn´t just funny, it teaches a lot of things about life.
And you don´t need to read just a few chapters to be addicted, it´s a great manga(and anime) since the beggining.

this is like a once in a lifetime series... reading the synopsis would get you addicted immediately. the plot is so addicting, the characters all lovable. plus the author is so well informed, like many allusions and mentions to a lot of aspects of pop culture and the like... after the urumi miyabi drama it got kinda predictable and the plot a little different but yeah, definitely on the top of my favorite mangas. 10/10 (one piece is 11/10

ok im at 43 episode I wanna start the manga from what chapter should I start? uper 43 episod?

I suggest if you wanna read the manga, you should start from the beginning. Cause there's a couple of things that are different in the anime than in the manga.

Yes, the manga is very different from the anime, they are both great bit different, you should start reading from the beggining.

Great manga but the ending was poor in my opinion. What kind of things are different in the anime

exactly. The ending in the anime is pretty lame i would say but the mang has more satisfying ending. Moreover the story in the manga goes beyong the one in the anime.

where does the anime end

the last episode of the anime is the miyabi the killer part, just right after okinawa. this part is not in the manga. so the anime stopped following the plot after the okinawa arc.

After I have seen the Anime GTO and I hat lots of fun watching I got interested of the beginning Story of Onizuka so is here anyone who has a clue where I can get GTO: The Early Years?

chronologically published its shounan > bad company > gto, but the shounan Edited Mangas are only up to a few volumes

Are there any Websites where I don't have to make a regestration?

Just register its not difficult, doesnt cost money
You could use #lurk but you have to register your name on the server

At which chapter does Shounan Jun'ai Gumi end? @ stoptazmo.com it goes only up to chapter 65.
I heard that Shounan [...] has 31 Volumes. Is that right?