A collection of five Boichi short stories, including the well known Hotel: Since 2079
Last edited by a moderator: Jan 5, 2012

I highly recommend this one, fellas. My favorite one-shot by far.

Not as good as Hotel because I felt that the storyline was a bit too cliche in some ways.

This one and White Clouds is awesome! I second the recommendation.

Really? I think it's good. The premise is simple but the execution is just awesome!

And I third those recommendations. This is one read that's a must for all manga people out there!

I like this one-shot, one of those that makes you think...

Sniff..such a beautiful post-apocalyptic story. I recommend it to all.

I was surprised to see a topic about this here, I was going to make one myself.

One of the best one shots I've read, really touching.

Illuminati and Japanzai translated the two remaining stories: It Was All for the Tuna and Stephanos. They also released new versions of the three previously available one shots. The two newly translated stories should be a good excuse for fans to reread Hotel, Present, and Diadem again.

The new release finally pushed me to read Hotel. A great set of stories, though the best known, Hotel itself, was not my favorite. I am partial to Present and It Was All for the Tuna, both extraordinarily well told. The title story was very well told though, one of the better environmentalist stories I have read, incredibly poignant. The end of Present made me choke up, very sad. And It Was All for the Tuna was a great, funny, touching story about the real driving force behind progress. All five stories were very good, over all an excellent collection.

I added the volume cover to the OP.

It Was All for the Tuna was a beautiful thing.

First of all: I think the first post ist wrong, as the Hotel one-shot isn't named "Since AD 2079" - That's the original one-shot.

I'll quote myself from the "What Manga are you reading/Going to read next"-thread:

Comment: Amazing one-shot in everyway! The story and pacing is phenomenal. A must-read for everyone

Comment: The original version of Hotel. Not nearly as good as Hotel. It's strong points is that it's 52 color pages.

Comment: Pretty good one-shot, but the story is weird as hell. It was very entertaining

Comment: Random!
I thought Hotel was an amazing one-shot. The story is touching and 'realistic', and the pacing just makes it all perfect. The awesome art made me just sit and enjoy the sight of total epicness, as it's both extraordinary good and fitting to the one-shot. This is a one-shot that wants very much with it's story, and unlike many one-shots and mangas who fail at this, Hotel does it perfect! 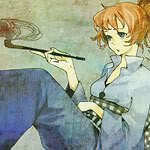 Hotel is definitely one of a kind, it makes you think about the real world and its future, very original. i enjoyed reading it
You must log in or register to reply here.
Share:
Reddit Pinterest Tumblr WhatsApp Email Link
Top