Shoujo K - Memory of Red, and K Project Side Stories

About
Set in a world where history has taken a slightly different course from the one we're familiar with, K follows the story of a young boy whose life is caught in a psychic war between seven kings with unusual powers.

Main character, Yashiro Isana, aka Shiro, is having lunch with a cat on one of the school rooftops. After his lunch break, Shiro goes on an errand for his classmate Kukuri to prepare for their upcoming school festival, only to be chased by some intimidating-looking men.

Whilst each of the Kings and their followers are warring against one another, Shiro gets caught as he seems to resemble someone involved in the war. From the moment he is involved, his life changes completely.

Status: Weekly & Half-Seasonal. 13 Episodes completed
Season 2 for another 13 Episodes has been green-lit for late 2013. 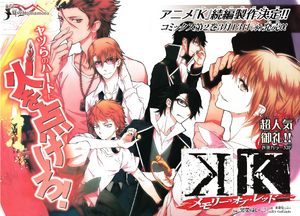 About
The story follows the Third King Mikoto Suoh, known as the Red King who created a group called HOMRA filled with extraordinary people who are the followers/clansmen of the Red King. If you manage to successfully join HOMRA, you also acquire unbelievable psychic abilities.
This is a prequel to enjoy before or after you've watched the anime.

This is another series set prior to the events that take place in the anime. Set at about the same time as K Memory of Red, this series follows the story of Kuroh before the K Project anime.


I think this is an amazing series with lots of potentional. It should be noted that this franchise came straight from an anime team as oppose to coming from either a game, novel or the most usual way, a manga.
The anime looks fantastic and seriously modern, the plot is a serious non-mainstream plot with dark twists. The way the manga's tie-in to the anime which will be coming back for another season is very nice too.

This series is worth your time.
Discussion here

Your expectations for the next season?
Last edited: May 14, 2013 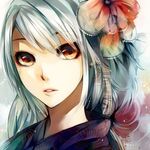 Oh! A specific thread for K!!!

I didn't know that such details about the second season... I suppose they could air it in the next autumn season, like the first but who knows.
And one thing. Kuro's manga Stray dog story finished last March in its fith chapter. See the Edited Manga team's note: http://september.strawberrywine.org/archives/2229

I thank the mods for promo of the thread too.
Thanks on the info of K Stray Dog btw

Its because the popularity of the anime series in Japan was immense for just 13 episodes.
There have been events of cosplay and its been demanded at manga conventions and exhibitions in Japan in such a short space of time.

Also, the fighting scenes in the anime really caught my eye.
The weaponry is quite modern and the fighting styles are quite unique.

I watched K, I didn't know what it was, but it was so pretty. The series definitely increased in value for me after reading the Memories of Red, and the Stray Dog updates.

K memory of red ending chapter got to me, wanted so much more, thank goodness they are doing memory of blue in aria later this year, or is it next month.

K side black and white is worthwhile too if only for the ichigen and kuroh stuff. Its sweet.
Last edited: Sep 4, 2013

K - Memory of Red is actually serialized in Aria, a shoujo magazine from Kodansha. None of the K Project side stories were serialized in shounen magazines. The thread has been moved here, reflecting the demographic of the primary manga.

well, i've read K-memory of red, and want to know more about the K series. Where should i start reading/watching? and in what order ?


sebasxlr said:
well, i've read K-memory of red, and want to know more about the K series. Where should i start reading/watching? and in what order ?

You can watch the K anime.

The next one in line after memory of red is K: Days of Blue to follow along with Fushimi, Munkata, and the other blues.
K: Stray Dog Story to read about more on Yatogami Kuroh.

While K: The First follows along the beginning of the K franchise (basically before episode one, or covering the brief backstory covered up in that final chapter or so of K Memory of Red)
You must log in or register to reply here.
Share:
Reddit Pinterest Tumblr WhatsApp Email Link
Top