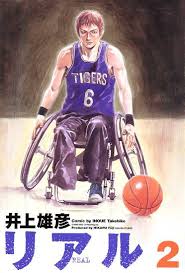 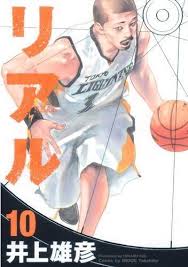 Real features a cast of characters who find themselves being marginalized by society, but are all united by one common feature: a desire to play basketball, with no place to play it in. Nomiya, being a high school dropout, has no future in his life. Togawa, being a difficult personality, finds himself constantly feuding with his own teammates. Takahashi, once a popular team leader, now finds himself being unable to move from the chest down.

Real also deals with the reality of physical disabilities, and the psychological inferiority that the characters struggle against. The characters break through their own psychological barriers bit by bit.
Anyone else read this series? I am a huge fan of Inoue (from my first chapter of slam dunk to chapter 208 of vagabond) and find this series to be another one of those hidden gems. I guess i should give the run down for those that havent read it. This is a manga loosely about basketball. I mean on the surface it is about a kid stuck in a wheelchair playing basketball and a guy whose life has gone astray but he plans to get it back on track and one of the ways is through basketball. However, underneath that, and what is more prevalent throughout the series, are the struggles of the characters. Most struggle with being physically handicapped but one struggles with being emotionally and mentally handicapped as a result of his mistake. I really love this series and would recommend it to all. However, this is not the kind of manga for people wanting a regular fix because it is release yearly (i think) in tankouban form. Omanga (omanga.net) is Editing it and they have released 26 chapters of it.
Last edited by a moderator: Oct 31, 2011

I think i'll have a look at this manga soon, I loved inoue's slam dunk, its one of the best really, the story is really good, and the suspense in the games too, the comedy is hilarious, and its about basket ball and charracter building.

I think slam dunk is a hidden gem too, and thanks for telling us about this, if its anything similar to his prior work and has the same touch, I think its great.

This is really different from slam dunk. It shows his evolution as a writer and an artist in multiple ways but one of the important ways is that he makes an essentially basketball themed manga not about basketball and it is okay. The characters are the strong point in this series. While it was the same in slam dunk, slam dunk also has the exciting matches (the last one being the best in any sports manga) while real doesnt really

REAL is a great piece of work. I might like it even more than Vagabond, and that's saying a hell of a lot.

I just wished he would release it more often. I want to see how the para-basketball japanese team works out and how the afro guy's life plays out too. Then theres the captain of the basketball team, or former at least

Well I'm just glad he continued it... He took a very long break from Vagabond and REAL some time ago; which comes as no surprise just looking at the way he draws and writes.

That is always good. He draws the characters so well and his stories are next to none. His covers are real are amazing. I just love his coloring abilities especially now that he paints them instead of inking them.

Slam Dunk is anything but a "hidden" gem as there are very, VERY few mangas out there that have sold better than it. Prior to the unstoppable sales monster that is One Piece, Slam Dunk was the ONLY manga that could compete with Dragonball sales in Japan. (Kochikame doesn't count!)

I haven't really been able to get into REAL though, I really want to but there's just not enough out.

... Who said slam dunk is a hidden gem? I was saying that real is one of those hidden gems because no one seems to know about it here. I know just how well slam dunk has sold.


conan said:
I think slam dunk is a hidden gem too, and thanks for telling us about this, if its anything similar to his prior work and has the same touch, I think its great.
Click to expand...

He said Slam Dunk is a hidden gem!

OHHH *slaps self on head*

I've been trying to download Real from omanga and the http downloads are dead. Also, I found some torrents for later volumes on thehawks tracker and they have one seed (not to mention they don't have the first two volumes). So does anyone know of alternate sources of download? I'd really like to read this one. Slam Dunk is everywhere but not this.

I havent seen any of them. I hope omanga releases something soon.

I r teh winner. Persistence pays off (and some luck I might add).

Yah, thanks. Found the rest btw. But I'll have to save them pic by pic. I'll take 27 again since the Jap raw is fugly. You'll have them tomorrow. Feel free to worship me or something. Now we just need someone to tell us what's going on.


Siedhr said:
Yah, thanks. Found the rest btw. But I'll have to save them pic by pic. I'll take 27 again since the Jap raw is fugly. You'll have them tomorrow. Feel free to worship me or something. Now we just need someone to tell us what's going on.
Click to expand...

If someone tell you, could you tell us in the forum?

If someone tell you, could you tell us in the forum?
Click to expand...

I was kinda pinning my hopes on somebody in this thread. But if I do find out somewhere else, I'll be sure to let you all know.


Siedhr said:
I was kinda pinning my hopes on somebody in this thread. But if I do find out somewhere else, I'll be sure to let you all know.

Thanks, nothing prevent us to hope

Found a one shot that occurs before the Real series starts or something similar to that. It's called Pierce. This is a RAW file. Not scanlated. You'll just have to ask omanga to scanlate it if you want it done. Or do it yourselves here. Either or.

Just happened to come across some other RAWs for Real. All 5 of the volumes that have been released so far. These are the high quality volume scans. Volume 5 goes up to chapter 30 in the series. I realize omanga is at chapter 26 or 27 or so, but hey, I just happened to run across these so here they are.