Any updates on the status of the last two chapters?


redcometfm said:
Any updates on the status of the last two chapters?
Click to expand...

They're in progress. Sit tight.

Urgh, you know whats so fucking stupid? Effin Viz is taking forever with their YYH releases. Its like 2 or 3 books a year. Naruto and Bleach get WAY more than that! Its not like its that hard to translate, especially with the rate at which they release other titles, but it just seems like theyre REALLY milking it. From the publishing dates, it looks like we won't get the final volume until early 2010. Pricks.

But they wouldnt have come out with new TV dvd sets if that wasnt the case.

Well, the last two chapters have been completely translated into English and should be scanned soon. It's been a helluva ride. So once they're out, discuss! What did you guys like better about the manga now that you've had the chance to see it all? What did you think was worse?

The anime was able to fill up the last tournament more, and everything seemed to last a lot longer.
Though the extra parts in the manga, the little one-chapter stories, were really cool, I wish the anime had put that in instead of their ending.
Course, if Togashi hadn't had to rush the final tournament and end it right in the middle, who knows how it would've gone.
Course, now in Hunter Hunter he's had 10 chapters taking a total of 10 seconds to pass.

Thank you, HisshouBuraiken!!!
The manga is interesting, definetly has alot of humor but what struck me is some of the more touching stories. I almost cried when I read the Old Man-Raccoon story.

Man, this is an oooooold threat lol. Anyways, I had a couple of questions about the manga and anime which I hoped would be answered here.

Anyways, yusuke was already an S-class fighter when he first met hokushin yet hokushin made it clear he was his equal at the time. If we consider this page it would even seem like hokushi was actually the stronger one. The guys from the tournament had over 100000 points of power which is 3 times the power sachi had and more than what mukuro's second hand before hiei had.

Now, for my questions:
Why did the anime refer to the tournament guys as being A class? Even the anime showed the above numbers which would make it painfully obvious they were S-class. They would still be at least 10 times weaker than the main candidates (since they were equal or greater to yomi) to win the tournament but but they were in fact s-class. How in the hell did yusuke last 60 hours against yomi? Or is the anime version actually considered cannon or something of the sort? Why did kurama say he had so much trouble against shigure in the manga? In the manga he said he wasn't sure of how he managed to win against shigure however the numbers would suggest kurama had at least twice as much power as shigure and it should have continued to grow during the following 6 months until the tournament. Was any of these ever addressed in some databook or something or was togashi simply rambling in the manga when he drew this?

Ah, Yu Yu hakusho! One of my favorite anime/manga series!

Btw, I have this martial art moveset project revolving around what it would be like if Shizuru Kuwabara had the same spirit weaponry abilities as her brother. Come check it out if you guys are interested: 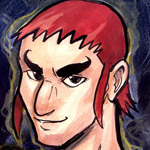 kkck, I think those are just power level potholes. Especially if you are watching the dub. Trust the manga first, I'd say the Tournament guys (friends of Raizen right?) are all S class. Yomi says it in the anime too "powers close to mine" (at least in the dub). With Shigure, its been some time right? I am assuming his power has gotten stronger since we first met him. Also, in the anime Kurama didn't even want to use Yoko, so perhaps he did that in the manga too? Cool to see people still post in the Yu Yu Hakusho thread.

man, that is an old post lol Anyways, the reason for which I asked if the anime part was cannon for some stuff is that the manga plainly did not show it. If we assume the manga makes sense then we can infer a few things. Also, by the tournament guys I mean the guys who kurama trained for yomi's army (not the makai tournament lol). Raizen's friends would have had around 1500000 power anyways, not 100000.

yusuke was at around hokushin's level when he first went to makai. We do have to consider that after training hokushin said their roles were reversed so perhaps hokushin during that time was actually a decent bit stronger than yusuke although that could also have been attributed to yusuke initially not having much control over his power (as was the case against sensui). Anyways, if we assume yomi's son reached the level yomi expected we can assume the kid actually had a respectable 500000 power. That is roughly 5 times what kurama's trainees had and apparently what yusuke had. Now, if we assume yusuke was indeed at yura's level then we would see that at least in terms of spiritual energy yomi should actually be more than able to overwhelm yusuke which in this particular manga is an overwhelming deal to say the least. In this regard a 60 hour fight which left yomi weakened for his nexts fights would seem unlikely, he should hypothetically be able to school yusuke as much as he did yura. Heck, 100 days before (admittedly yusuke should have been weaker back then however that does not have an effect over the facts given during the tournament) the tournament yomi was pretty sure he would have been able to defeat yusuke, kurama and the gang using but a third of his power.

Kurama objectively had over 150000 power when he killed yomi's number 2 and yet when he fought shigure who was the weakest of yomi's personal army he supposedly had enough trouble to make him wonder how in the hell he won. Not only kurama had over 5 times that guy's power 9 months before the tournament but he also should have had time to grow stronger too.

This is why I ask if the anime was considered cannon for this battles. None of it makes sense. If we assume the anime is actually cannon about how each of these fights went on then things would kinda make sense however if we assume it is not cannon then the manga is essentially nonsensical to say the least. The manga never hinted at yusuke being able to use any form of seikoki or kurama having issues with transforming into yoko either.

I feel the same way ^^ I loved the manga, but it definitely has, at least imo, the worst ending ever...especially considering it was his choice (as far as I'm aware) and not out of his control via cancellation. Plus the anime was my favorite as a kid so I'm extremely biased. (I own it all on dvd