Like us on Facebook, follow us on Twitter! Check out our new tumblr page. :)
Manga News: Toriko has come to an end; but be sure to swing by and share your favourite moments from the series!
Manhwa & Manhua News: Check out the new Manhwa and Manhua shout-out (March 2016).
Event News: One Piece Awardshas concluded. Check the results Here!
MangaHelpers > Manga > Browse > Brave Story - A Retelling of a Classic
Home
Chapters
Translations
RSS

Brave Story - A Retelling of a Classic 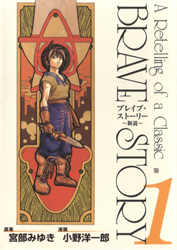 At school, Wataru Mitani, a meek boy, notices Mitsuru Ashikawa for his over-politeness and Kaori Daimatsu, Wataru's crush. One day, Wataru's parents divorce and his father runs off with his mistress, leaving his wife and Wataru behind. Later, Wataru's stepmother confronts her lover's wife over who Wataru's father really loves. After this argument, Wataru's mother, in shock, has a car crash and is seriously injured. One day after school, Wataru sees Mitsuru performing magic on school grounds. Without Mitsuru knowing, Wataru follows him through a portal in a house to a fantasy world called Vision. There Mitsuru is revealed to be a traveller, who wishes to resurrect his sister. Mitsuru and Wataru overcome an ambush by another traveller and Wataru is granted status of traveller by the guardian of Vision. Mitsuru tells Wataru to go out of Vision because of its dangers, showing his vicious nature by mercilessly killing a fellow Traveller.

Wataru and his friends have to collect five gemstones to go to the Tower of Destiny, where the Goddess grants each Traveler one wish. Each stone has a different quality: charity, bravery, faith, grace, and the power of darkness and light. During Wataru's adventures, he encounters friends and foes. Unfortunately, Wataru has to battle Mitsuru to find the gemstones.

I've read the book and seen the movie of this manga, and loved them. I hope oneday it gets scanalated. <3 Permalink " "