Like us on Facebook, follow us on Twitter! Check out our new tumblr page. :)
Manga News: Toriko has come to an end; but be sure to swing by and share your favourite moments from the series!
Manhwa & Manhua News: Check out the new Manhwa and Manhua shout-out (March 2016).
Event News: One Piece Awardshas concluded. Check the results Here!
MangaHelpers > Manga > Browse > Classmate (♀) to Meikyuu no Futekisetsu na Kouryakuhou
Home
Chapters
Translations
RSS 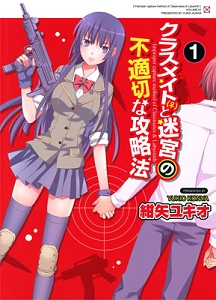 It was decided that Nishi High School would close in two years time and since then, the student population had dramatically dropped down to a total of seven. The remaining students, including Hazakura Motoya, decided to stay for the free ride through high school. So everyone is shocked when they suddenly receive three new transfer students, all girls: Kayama, Mizumura and Toujou. But their appearance is just a cover; they are elite members of a special military division that reports only to the president.

Soon after, Motoya witnesses a giant tower suddenly appearing on the school grounds. According to his new classmates, the tower can only be seen by a handful of chosen people and that all the military technology that the country has been able to develop in recent years was based on the information gathered from inside the mysterious tower. Motoya has been chosen by destiny to enter the tower with Kayama, Mizumura and Toujou to uncover the mysteries of the tower. [vyc]