Like us on Facebook, follow us on Twitter! Check out our new tumblr page. :)
Manga News: Toriko has come to an end; but be sure to swing by and share your favourite moments from the series!
Manhwa & Manhua News: Check out the new Manhwa and Manhua shout-out (March 2016).
Event News: One Piece Awardshas concluded. Check the results Here!
MangaHelpers > Manga > Browse > Dragon Quest: Realms of Reverie
Home
Chapters
Translations
RSS 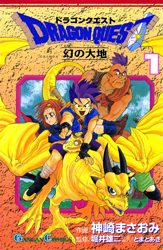 Realms of Reverie closely follows the storyline of Dragon Quest VI. The protagonist Botsu is an amnesiac young man from the village of Lifecod, whose only recollection is of a deadly fight against a demonic being in a strange castle -- a fight which he and his companions lost. Seeking to regain his memories, he embarks from his village on a journey across the world. Shortly after, he encounters a portal that seems to lead into another, oddly familiar reality ...