Like us on Facebook, follow us on Twitter! Check out our new tumblr page. :)
Manga News: Toriko has come to an end; but be sure to swing by and share your favourite moments from the series!
Manhwa & Manhua News: Check out the new Manhwa and Manhua shout-out (March 2016).
Event News: One Piece Awardshas concluded. Check the results Here!
MangaHelpers > Manga > Browse > Jinrui wa Suitai Shimashita: Yousei, Shimasu ka?
Home
Chapters
Translations
RSS 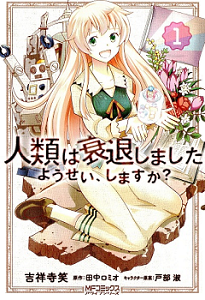 In the future, humanity is on the decline. Due to decreasing birth rates, the population has been quietly decreasing, and society has begun to regress in many ways. However, all is not lost because there is a new kind of people who are inheriting the earth-- small humanoids known as 'fairies.' This story features the young woman who becomes an official human-fairy mediator. Living with her grandfather, she plans to build a solid relationship with the fairy population. She runs into problems right away, as she suddenly realizes how difficult it is to even greet the local fairies. They see her as huge, terrifying, and godly, and it will take plenty of tasty incentives to convince them that she really does want to be their friend. Her exciting days with her fairy constituency have only just begun! [tethysdust]