Like us on Facebook, follow us on Twitter! Check out our new tumblr page. :)
Manga News: Toriko has come to an end; but be sure to swing by and share your favourite moments from the series!
Manhwa & Manhua News: Check out the new Manhwa and Manhua shout-out (March 2016).
Event News: One Piece Awardshas concluded. Check the results Here!
MangaHelpers > Manga > Browse > Kimi ga Tame ni - Kusunoki Masashige Emaki
Home
Chapters
Translations
RSS 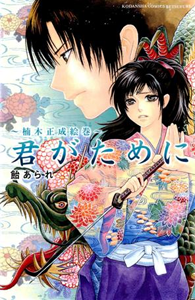 This is a story set in the chaotic late Kamakura period, when Japan was ruled by a shogunate. Many samurai clans formed villainous gangs and made life very dangerous for the common people. After her village was attacked by a violent gang, little Aguri was one of the few survivors. She was picked up by the Kusunoki clan, who she initially blamed for the murder of her town.

Over time, she learned that strength could be used to protect people, not just to hurt them. As the Kusunoki family raised her and taught her to fight, she learned that their clan was one that strove to protect the weak. Her first love was the Kusunoki heir, Masashige, though he only saw her as a little sister. As they struggle through these difficult times, with an unstable government and the dangerous possibility of overthrowing it, will Aguri ever be able to win Masashige's love? [tethysdust]