Like us on Facebook, follow us on Twitter! Check out our new tumblr page. :)
Manga News: Toriko has come to an end; but be sure to swing by and share your favourite moments from the series!
Manhwa & Manhua News: Check out the new Manhwa and Manhua shout-out (March 2016).
Event News: One Piece Awardshas concluded. Check the results Here!
MangaHelpers > Manga > Browse > Minase Youmu to Hontou wa Kowai Cthulhu Shinwa
Home
Chapters
Translations
RSS 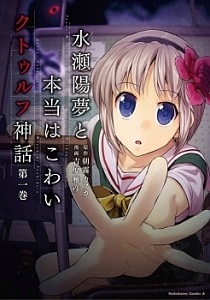 One day, an ordinary high school girl named Minase Youmu is kidnapped up in the mountains. Her kidnappers claim that she has taken some kind of "medicine" and that there's no going back. Luckily, though, a former detective named Sanpouji Kotetsu happens to pass by where she is being held, and rescues her. Kotetsu hastily gets the underage girl to the police, where the investigator Naru Asuka and her 'psychic' partner Hayama Reiichi take on the girl's case. Asuka, Reiichi and Kotetsu have to figure out who took Youmu--and what was done to her--before it's too late (if it isn't already)! [tethysdust]