Like us on Facebook, follow us on Twitter! Check out our new tumblr page. :)
Manga News: Toriko has come to an end; but be sure to swing by and share your favourite moments from the series!
Manhwa & Manhua News: Check out the new Manhwa and Manhua shout-out (March 2016).
Event News: One Piece Awardshas concluded. Check the results Here!
MangaHelpers > Manga > Browse > Shin Prince of Tennis
Home
Chapters
Translations
Forums
RSS 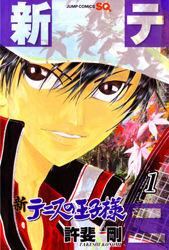 A new chapter in the Prince of Tennis series.

The Prince is in America? The Prince of Tennis, Ryoma Echizen, boards a subway in America as he prepares to head back to Japan. At a tennis camp in Japan, great tennis players have gathered together, but in a camp of three hundred high schoolers, why are there fifty middle schoolers this year? On the very first day, the director tests the campers by dropping two hundred and fifty balls from an airplane - anyone who can't pick one up gets sent home! How will Ryoma fare at this camp and in the tournaments ahead, and who is pulling the strings behind this camp? [polm23]

seriously, I was expecting the gang to be at least a few years older, but what is this?? they are the exact same age! where is my time skip? seriously...
aside from that, a great chapter, quite entertaining, it was like a big reunion party, and I enjoyed that, i guess.. Permalink " "
Review by daman246

I wish they let PoT end with the previous prequel, it had a weird ending after the final match, but the series was awesome as it was. More chapters are just ruining it.. Permalink " "
Review by Fayte

It's great to see players like Akutsu coming back to the tennis scene. Now we can see match ups we were only able to wish for, before. I'm glad it's back. Permalink " "
Review by mlandry

I think 26 chapters is giving enough of a chance, especially for a monthly manga. This is nothing exciting. Not even a shadow of the original PoT. I stopped liking PoT after they added super powers so I was happy that they closed that idea at the end of PoT.

I thought we would see something interesting in this new series, going back to the how the early PoT chapters were but unfortunately they seem to have forgotten how to play tennis. Instead, we have boot camps that can only be described as hilariously bad and the "matches" are about 2 panels long each. There has been pretty much no character growth so far despite most chapters being full of text.

As others have already mentionned, I was hoping for a time jump and a new cast of characters around Echizen with him playing on the junior world tour or something. The whole "school vs school" or "team vs team" was interesting but I've seen enough of that in PoT. I was really hoping for more of a solo climb through the world rankings with the supporting cast being other players and not just teammates.

I give it a 3/10. I will keep reading it and hopefully it pick up eventually and become interesting but I'm not going to hold my breath on that one.

P.S : I didn't lower the rating based on what I wanted the manga to be but I chose it based on what I think the current storyline merits. Permalink " "
Review by babolatbeast777

I agree with @chubbycheese , where's the timeline ? And isn't Kaidou suppose to be the captain now ? Isn't that where they left off ? Anyways, I just brushed that off, since I love PoT so much, but New PoT isn't that bad aside from the timeline thingy, it's pretty great. :D Permalink " "