Like us on Facebook, follow us on Twitter! Check out our new tumblr page. :)
Manga News: Toriko has come to an end; but be sure to swing by and share your favourite moments from the series!
Manhwa & Manhua News: Check out the new Manhwa and Manhua shout-out (March 2016).
Event News: One Piece Awardshas concluded. Check the results Here!
MangaHelpers > Manga > Browse > Nigeru wa Haji da ga Yaku ni Tatsu
Home
Chapters
Translations
RSS 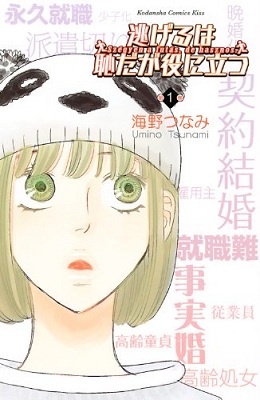 25-year-old Moriyama Mikuri has an advanced degree, but has had no luck finding a permanent position. She's been living with her parents and doing temp work, and her latest job is doing housework for a single salaryman, Tsuzaki. Mikuri longs to start a career in her field, and her Aunt Yuri, who has had success in her professional life and who regrets never marrying, also wants Mikuri to find love.

When Mikuri learns that her parents are planning to move to the country, she realizes her time is running out. She still has had no luck starting her career, so it seems she will have no option but to move to the country with her parents. She finds another option in moving in with Tsuzaki, who doesn't want to lose his housekeeper. To deal with the scandal of their living together, they get married--though just on paper. Now Mikuri starts her unusual new life, as a woman looking to start her career and as a new 'wife'! [tethysdust]