Like us on Facebook, follow us on Twitter! Check out our new tumblr page. :)
Manga News: Toriko has come to an end; but be sure to swing by and share your favourite moments from the series!
Manhwa & Manhua News: Check out the new Manhwa and Manhua shout-out (March 2016).
Event News: One Piece Awardshas concluded. Check the results Here!
MangaHelpers > Manga > Browse > Ore no Imouto ga Konna ni Kawaii Wake ga Nai
Home
Chapters
Translations
RSS 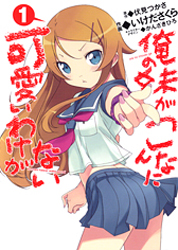 Kyousuke thinks of himself as a pretty normal high school kid, but his little middle-school-aged sister Kirino is something else. She's the coolest of the cool little girls at her school, and the prettiest of the pretty. It's no surprise that she's contemptuous of her older brother, and she hardly ever even speaks to him.

it\'s still continue, not over yet. please remove the complete status Permalink " "