Like us on Facebook, follow us on Twitter! Check out our new tumblr page. :)
Manga News: Toriko has come to an end; but be sure to swing by and share your favourite moments from the series!
Manhwa & Manhua News: Check out the new Manhwa and Manhua shout-out (March 2016).
Event News: One Piece Awardshas concluded. Check the results Here!
MangaHelpers > Manga > Browse > Radiata Stories - The Song of Ridley
Home
Chapters
Translations
RSS

Radiata Stories - The Song of Ridley 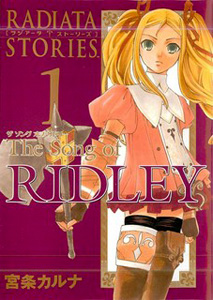 In the center of the land lies the human kingdom of Radiata and surrounding it are the lands of fairies, elves and goblins. The relationships between the two species were never good but things got worse after the attack of the dragons.

Today is the Knighthood entrance exam for Ridley Timberlake and she has been training for this moment her entire life. Winning the tournament today means she will be initiated into the knighthood. Her first round is against a boy her age named Jack Lassel and she defeats him with ease. She fights her way to the finals where she becomes the champion and a knight only to find out that Jack, who is the son of the legendary dragon slayer, was also inducted. [vyc]