Like us on Facebook, follow us on Twitter! Check out our new tumblr page. :)
Manga News: Toriko has come to an end; but be sure to swing by and share your favourite moments from the series!
Manhwa & Manhua News: Check out the new Manhwa and Manhua shout-out (March 2016).
Event News: One Piece Awardshas concluded. Check the results Here!
MangaHelpers > Manga > Browse > The Temple of El Alamein
Home
Chapters
Translations
RSS

The Temple of El Alamein 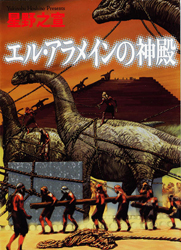 The Temple of El Alamein is a compilation of World War II short stories from the perspective of the German military personnel. As the saying goes, the winner writes history and these stories are untold, unwritten part of history of WWII. Taking place between 1940 and 1945, when the war was at its most violent peak, each story takes place in a different part of the world where Germans were fighting.

One story takes place in Egypt where soldiers find an ancient ruin that prove the existence of dinosaurs that helped build the Great Pyramids. Another story tells how one German fighter jet was able to take down the B47 Stratojet 40,000 ft. in the air, way above what a fighter jet could achieve at the time. [vyc]