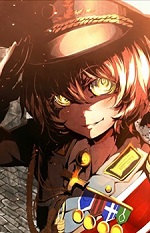 What are your long term predictions for this series? -Tsukasa kills Chrome in front of Senkuu. This will probably send Senkuu into despair, and cause him to give up on Science for a short while, kind of like what happened to Jaime Lannister in A Song of Ice and Fire after he lost his hand to Vargo.
-The person behind the Stone Age is probably Senkuu's father.
-The village Senkuu is in right now will be destroyed, and the only survivors will be Ruri and Kohaku.
-Taiju and Yuzuriha will probably be taken hostage by Tsukasa.

-Senkuu will probably be taken prisoner by the village chief where some sort of trial for his life will be done, which will lead into some sort of reveal the the village chief is a bad guy and will be thrown out of the village later of making Senkuu the knew chief of the village.
-Some sort of accident happens to the village weather, natural disaster, animals whatever make it so that the villagers have to move bringing up some tension among the people about whether Senkuu is fit to lead the village after the incident causing some of the villagers to leave the group.
-Senkuu and what remains of the village set out looking for either a new home or another village(This really depends on what happened to the village)
- Tsukasa secures the revival cave and meets up with Taiju and Yuzuhira, he knows their up to something but lets them live until a reason to cause them harm arises. Afterwards Tsukasa starts reviving some of the younger people/ finding random people who are decedents from revived people along the way.
-The villagers that left Senkuu somehow find and join Tsukasa's village, which leads Tsukasa to hearing about Senkuu being alive causing him to attack either Taiju, Yuzuhira, or both. (Really depends on how dark the author feels this series needs to go)
-One of them escapes and finds their way to Senkuu and tells them about what happened causing Senkuu to try and attack Tsukasa's village, which leads to a major defeat at the hands of Tsukasa.
-Tsukasa has forced Senkuu's village into slavery and Senkuu is left to die in the wild causing Senkuu to question himself on whether he is really capable of saving everyone and restoring the world to the modern age.
-Senkuu has some sort of flash back to a conversation between him and either his dad or Taiju, which snaps him out of his stooper causing Senkuu to start prepairing himself to once again take on Tsukasa. Senkuu somehow sends word to the people of his village and his friends that they'll have to wait a while before he rescues them.
~Time Skip~
That's about how far ahead I've thought, and honestly everything I wrote doesn't really sound all that interesting.
You must log in or register to reply here.
Share:
Reddit Pinterest Tumblr WhatsApp Email Link
Top