Well, I suppose that some of you know that title because of anime of that title which now is subbed by Saizen group (and they are doing great job on this!), or maybe you gave that anime on your local country's tv programs. Yes, I'm of those succesful people, that have it on tv, it was on polish tv program and it was aired twice! xD Yes, and I have watched this from the begining first time, because of lack sometimes I missed episode. Than when it was aired the second time, I watched every episode avaible. Also i think the end of the series was queite "open", but oh well, it ended, so be it. Than some time after that, probably 4/5 years of that watching ADS, which was my favourite show (and is now) I was told by friend that Saizen is subbing this anime in dvd quality (it was then 2/3 episode xD), but only minus would be that they are really slow realsing it (I was not an really big manga or anime fan that time you know ;p) ^^" When I knew of that I firstly download episodes and my love to that anime was reborn again (yeah, probably you can say I'm maniac on that title). And I could finally watched it in japanese with english translation. It has 58 episode total with one movie if I'm correct (now 26 subbed by Saizen-fansubs). Personally I think, that this anime is better than anime Tsubasa, but it's only me ;p And I love it xD
If I would write about anime, it would be a long review, and it would be not objective xDxD


From animenewsnetwork.com said:
Plot Summary: Toshihiko Tanaka is a boy who entered Kakegawa High School with his friends Kenji & Kazuhiro, in order to play soccer with Yoshiharu Kubo, a great soccer player whom they have idolized. While his other two friends were reluctant to play again, "Toshi" eventually convinces them to play for the team. The team soon find themselves in the midst of a quest to the All-Japan High School Championship, while overcoming obstacles along the way.
Click to expand...

In short It's the story of three young soccer players and one girl, but with more concentration of one person, Toshi Tanaka. It's all about his love to footbal and his friends, with a plus of some of romance i would say. And it's even traingle between three of this main characters :x About football matches, they are great. In some way of story, there is some death of one of the greatest soccer players in this anime (who watched than knows), and second time to achive their (Kakegawa team) goal... which is succesful or not, you must watched to see ;p And main character, Toshi Tanaka, is really amazing with his left, and he is the one to have later nr 10 on the T-shirt, in some way he resembles someone who whore nr 10 before.
Matches are not 5 episodes long (like its joking about such animes :x). There are of kors some fantastic shots in here, but really, there are only few examples of that (but which soccer anime hasn't it). And it's probably for me more real like, normal way of really superb matches. Besides soccer, there is also a school life motive, and a little bit of love triangle, superb mix I would say ^^

And this part of life when your going to high school, first loves, and all. Probably that's why I loved that anime when it was first aired in Poland (I was in middle school/gimnazjum), and now because of Saizen group, which I thanks very much. Also anime is queite aged, because it was first aired in Japan in 1993, but for fan of anime it doesn't matter ;p Actually I like better older titles of anime xD

This anime rocks if it goes for soccer. If you didn't saw it, even if your not soccer fan, you should give a try with this title

And if you saw it, than you can tell hre if you like it, love it, hate it, your thoughts xD

This happens to be one of my favourite sport series. The Kakegawa/Kakenishi trio is just awesome. Too bad
Kubo died. He could've been bigger if it wasnt for his illness

I agree with Your spoiler ichimaru : ( And when I was watching the first time anime
I was really curious why Kubo is such boring, he sometimes don;t go to training, matches, it was something i thought why he is so selfish to not keep with Kakegawa.
Only when I watched the second time i saw that if you look closely how he appears in anime, it looks like something is wrong with him.

Well considering the time period, aoki is better than captain tsubasa which was made in 1981.

I still prefer captain tsubasa though, it's more large, more characters, more epic, more episodes and still going on, more games and it was the first cartoon I ever saw when I was 3 years old.
Last edited: Jan 29, 2008


SantaBla said:
I still prefer captain tsubasa though, it's more large, more characters, more epic, more episodes and still going on, more games and it was the first cartoon I ever saw when I was 3 years old.
Click to expand...

Of kors anybody can like more that or that ^^

And I'm rather curious why they didn;t continue with ADS.. The last of manga is probably from 2003, so in the future there can be new volumes, chapters, i don;t know, because i didn't read it. But if there well more of that, probably it;s because it wasn;t so popular. But I think it should heh

And I can't wait for that second ending, when Saizen gruop will realese. I read probably on ANN that in 50 something episode there were few epsiodes with differnt ending music. I'm waiting for this hyhy

I even forgot it was such event for few episodes xDxD

hey bodies,
We know the anime has animated about first 33 volumes and manga has 66 volumes. I wonder, is there anyone who have/know the mangas download address or sometin?
Thank you. 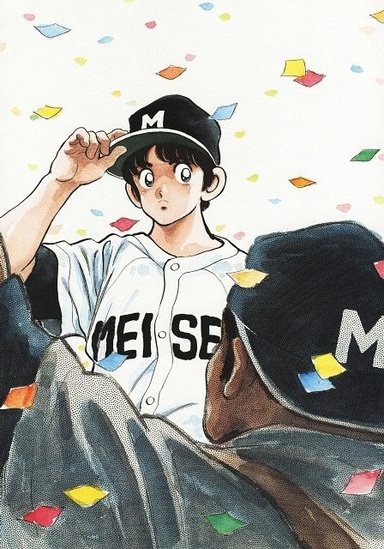 hey bodies,
We know the anime has animated about first 33 volumes and manga has 66 volumes. I wonder, is there anyone who have/know the mangas download address or sometin?
Thank you.

PLEASE TELL ME BY SOME MIRACLE YOU ARE STILL ONLINE HERE. Its the end of 2021 and I recently watched Aoki Densetsu Shoot
I want to read all volumes of manga but can find any online. If by any chance you found it and are still online and hopefully alive(LOL) after like 14 years
Then please please please let me know

IF ANYONE EVER FINDS ALL VOLUMES OF THIS MANGA WITH ALL SEQUELS PLEASE LET ME KNOW
I DONT CARE IF ITS ONLINE OR PHYSICAL MANGA(BOOK), PAID OR FREE
I NEED IT