Sooo,
I will post all the downloadlinks and episode subs for D.Gray-Man here.
All Downloadlinks are BitTorrent unless stated otherwise.

Brazil
Aya Fansubber: #aya@irc.rizon.net -- no additional information
Last edited by a moderator: May 10, 2008

This just made this weekend really perfect =)
I really like the trailer and finally some more animtaed pictures. So yeah only about 2 weeks left and we will have the first episode to watch. Can't wait for it after seeing the trailer.

that song was awesome

Pros:
The song is good (I think it's the OP)
Animation seems good enough.

Cons:
Allen's voice...it sounds so childish and overly feminine. He's 15 years old, not 6. I was expecting something like Vic Micnogna's Edward Elric.
Why is Kanda's hair blue? Black hair fits an arrogant character like him much better I think.

The animation looks good and so do the characters. But I do agree that Allen's voice seems to young.

I also agree with Allen's voice sounding too young but I might get used to it in time. 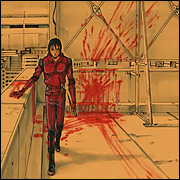 abingdon boy's school, Innocent Sorrow. Better than I expected, but I was still hoping for something with a bit more of a gothic or visual flair for this series.

Allen's voice sounds find to me. Nothing I wouldn't expect from the lead in an anime series, at least not the Japanese version. Lead characters like Allen (or Edward, or Naruto, or even Goku) are usually voiced by women seiyuu, as they tend to sound more youthful and relate better to the target audience (young boys and male teenagers). In contrast, a lot of English dubs amplify their characters ages and have the main characters sound more clearly male. This is true of nearly every anime series I've seen, the lead characters almost always sound older in the dubs. I guess if you watch dub anime, it might bother you more than if you've seen a lot in the original language and expect it. And considering that Allen's seiyuu is a 20 year old girl, it isn't that unexpected.

On another note. Gotta admit, I'm not too impressed with SD's sub. The fact that they translated AKUMA kinda puts me off. I want a group that's made of people who already know enough about the manga to get the names and terms correct. :/

rapidshare doesn't work for me arghh its so so so frustrating.
pls pls...can you upload it to sendspace? pretty please...?

P.S. I heard the one woicing Allen before, she voiced Sando in Shin Angyo Onshi, a extremely soft spoken girl, so no suprises that Allen sounds young and girly.

he does sound childish but lets wait for the actual first episode.

@Allen Walker: Here's the subbed one for now^^
http://www.sendspace.com/file/qhg6fi


EDIT: Here the other one Allen Walker^^
http://www.sendspace.com/file/16fuxp

If anyone could get me us a download or torrent to any of those files... please don't hold back~!!

MP3s won't be ripped 'till the anime's out and the full versions probably won't be out until the CD singles are released.

But the anime is starting in about a day, so it won't be long now.

episode 3 by SD Subs out

wow that was quite quick, it was out just today, thanks for the heads up off to download.

Episode 4 is out subed