Like us on Facebook, follow us on Twitter! Check out our new tumblr page. :)
Manga News: Toriko has come to an end; but be sure to swing by and share your favourite moments from the series!
Manhwa & Manhua News: Check out the new Manhwa and Manhua shout-out (March 2016).
Event News: One Piece Awardshas concluded. Check the results Here!
MangaHelpers > Manga > Browse > The Alternative Cure Magical Girl Behoimi-chan
Home
Chapters
Translations
RSS 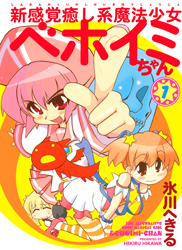 Average high school student Behoimi is one day approached by a highly suspicious individual claiming to be an alien, who wants to grant her the power to protect the Earth from dangerous space criminals. When Behoimi presses him for details, he explains to her that she will be transforming into a magical girl with the power of ... Science!?

A healing-type mahou shoujo action comedy of a brand new flavor, spinning off from the acclaimed "Pani Poni" gag manga.

Note: Behoimi is the name of a healing spell from the Dragon Quest RPG series.