Like us on Facebook, follow us on Twitter! Check out our new tumblr page. :)
Manga News: Toriko has come to an end; but be sure to swing by and share your favourite moments from the series!
Manhwa & Manhua News: Check out the new Manhwa and Manhua shout-out (March 2016).
Event News: One Piece Awardshas concluded. Check the results Here!
MangaHelpers > Manga > Browse > Animal Treasure Island
Home
Chapters
Translations
RSS 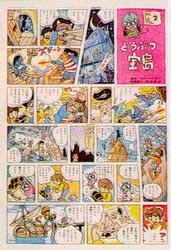 "Animal Treasure Island" is an animated feature film by Toei Doga (Toei Animation Studio) made in 1971, for which Miyazaki worked as a key animator. Miyazaki wrote a manga version of it for the serialization in a newspaper (credited as "by Toei Doga"). The story is based on Stevenson's "Treasure Island", most of the characters appear as animals, except Jim, the boy and Kathy, who is a typical Miyazaki heroine. It's a fun, slapstick adventure story.