Like us on Facebook, follow us on Twitter! Check out our new tumblr page. :)
Manga News: Toriko has come to an end; but be sure to swing by and share your favourite moments from the series!
Manhwa & Manhua News: Check out the new Manhwa and Manhua shout-out (March 2016).
Event News: One Piece Awardshas concluded. Check the results Here!
MangaHelpers > Manga > Browse > Apocalypse Meow
Home
Chapters
Translations
RSS 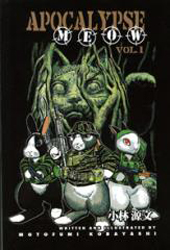 Apocalypse Meow is a three volume manga series written and illustrated by Motofumi Kobayashi. It was originally published in Japan as Cat Shit One in 1998 by Softbank Publishing, but was renamed for the US release to parody the title of the film Apocalypse Now, which also took place during the Vietnam War. It was published in the UK in 2004 by ADV Manga. It was also released in Poland in 2006, also under the title Cat Shit One. It has been released in France, Belgium and Spain, as Cat Shit One, by Glénat in 2006.[1]

In 2008 Kobayashi released a follow-up to Cat Shit One – Cat Shit One 80. Currently two volumes have been published in Japan.

A computer-generated anime adaptation of Cat Shit One by Studio Anima is also in the works.[2] The animated version is set in the Middle East rather than Vietnam,[3] and a version of the trailer that includes non-official English subtitles indicates that the action takes place after 1991.[4] The series is due for release early 2010.[5]