Like us on Facebook, follow us on Twitter! Check out our new tumblr page. :)
Manga News: Toriko has come to an end; but be sure to swing by and share your favourite moments from the series!
Manhwa & Manhua News: Check out the new Manhwa and Manhua shout-out (March 2016).
Event News: One Piece Awardshas concluded. Check the results Here!
MangaHelpers > Manga > Browse > Ashita no Familia
Home
Chapters
Translations
RSS 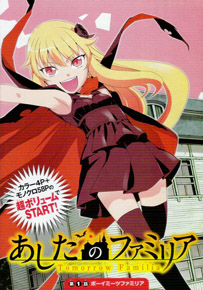 Tachimori Ashita inherited the Tachimori Mansion when his parents died in an accident. Originally owned by his great grandfather, the estate has been traditionally an inn that had many people living in it but, as of lately, it has become vacant due to Ashita losing his parents. As Ashita tries to revive the mansion in remembrance of his parents, he is surprised by a young girl looking vampire named Noi and her servant Sesera who claims to own the place.

According to Noi, she lent the mansion to Ashita’s great grandfather in return for maintaining the building until Noi returns. As a vampire, Noi has super strength, the ability to turn into mist and can cast various spells. She has a powerful dark aura that attracts evil spirits and, because of that, Noi has had to constantly be on the move. But because of that, she has been abandoned by her family and friends. Ashita decides to let Noi and Sesera stay and is determined to start a new chapter in the Tachimori Mansion history. [vyc]