Like us on Facebook, follow us on Twitter! Check out our new tumblr page. :)
Manga News: Toriko has come to an end; but be sure to swing by and share your favourite moments from the series!
Manhwa & Manhua News: Check out the new Manhwa and Manhua shout-out (March 2016).
Event News: One Piece Awardshas concluded. Check the results Here!
MangaHelpers > Manga > Browse > Assassin Chronicles
Home
Chapters
Translations
RSS 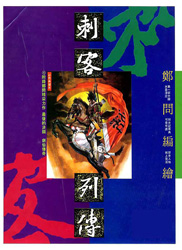 During the ancient war age when China was still a collection of smaller kingdoms, many warriors dedicated themselves as assassins to their leaders and lost their lives, one after another. These stories are based on the writings of Chinese historian-SIMA Qian (during the rule of Emperror Han Wu Di).

This Taiwanese publication chronicles the lives of five of these assassins: Cao Mo, Chuan Zhu, Yu Rang, Nie Zhang and Jing Ke. Each lived during a different time and country, but each were deeply loyal to the emperor they served. Each character had their individual tale, which describes their motivation for such loyalty, as well as their strategies for assassination.

The artwork depicts more of Chinese brush art instead of the common Japanese 'manga' art (think 'storm riders'). The comics are brief, but there are explanatory sections in between each story to give details on the characters. It's interesting for those who already know a bit of ancient Chinese history (or who have been watching Chinese warrior series/movies). However, do give it a go for a different genre of action comic. [6gatsu]