Like us on Facebook, follow us on Twitter! Check out our new tumblr page. :)
Manga News: Toriko has come to an end; but be sure to swing by and share your favourite moments from the series!
Manhwa & Manhua News: Check out the new Manhwa and Manhua shout-out (March 2016).
Event News: One Piece Awardshas concluded. Check the results Here!
MangaHelpers > Manga > Browse > Bari Bari Legend
Home
Chapters
Translations
RSS 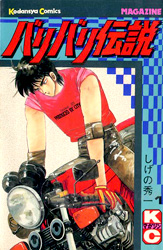 A very realistic manga about 4 high-schoolers and (illegal) bike races.
Manga got tremendous support from bike fans back then due to the realness and detail of the bikes Shigeno drew.
The story has a lot of similar points with Initial D. Racing on the public road (illegal of course) is the center of the storyline in the first half. It became a social problem in Japan because many "Hashiriya" got influenced by it and became "Rolling-zoku"(hashiriya trying to see how fast they can go through curves).