Like us on Facebook, follow us on Twitter! Check out our new tumblr page. :)
Manga News: Toriko has come to an end; but be sure to swing by and share your favourite moments from the series!
Manhwa & Manhua News: Check out the new Manhwa and Manhua shout-out (March 2016).
Event News: One Piece Awardshas concluded. Check the results Here!
MangaHelpers > Manga > Browse > Biohazard - Marhawa Desire
Home
Chapters
Translations
RSS 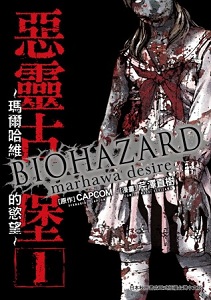 Professor Doug Wright teaches at Bennett University, teaching subjects such as bio-terrorism and chemical warfare. One day, he receives a letter from Asia's largest private high school academy: Marhawa Academy. The letter reads: "A biohazard has occurred inside the academy grounds." Doug immediately departs to investigate this incident with his nephew, Ricky, as his assistant. What he finds there looks to be another Raccoon City inside all over again. With the help of Chris Redfield and the BSAA [Bio-Terror Special Operations Unit], will he be able to stop the madness of the t-virus inside this isolated school? [DrCoke]