Like us on Facebook, follow us on Twitter! Check out our new tumblr page. :)
Manga News: Toriko has come to an end; but be sure to swing by and share your favourite moments from the series!
Manhwa & Manhua News: Check out the new Manhwa and Manhua shout-out (March 2016).
Event News: One Piece Awardshas concluded. Check the results Here!
MangaHelpers > Manga > Browse > Chronic Love
Home
Chapters
Translations
RSS 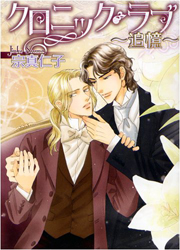 After the sudden loss of his father, Duke Alphonse Varney took over the affairs of his estate, which necessitated putting his mansion on the market to repay his sizeable debts. One of Alphonse’s classmates from his boarding school days, businessman Richard Turner, announced that he was interested in buying the mansion. Richard had reason to dislike Alphonse, which made Alphonse all the more unable to hide his opposition to Richard’s unexpected proposal, but in reality, there were hidden feelings between the two. This is a classical love romance collection set in polite English society.