Like us on Facebook, follow us on Twitter! Check out our new tumblr page. :)
Manga News: Toriko has come to an end; but be sure to swing by and share your favourite moments from the series!
Manhwa & Manhua News: Check out the new Manhwa and Manhua shout-out (March 2016).
Event News: One Piece Awardshas concluded. Check the results Here!
MangaHelpers > Manga > Browse > Déra Cinéma
Home
Chapters
Translations
RSS 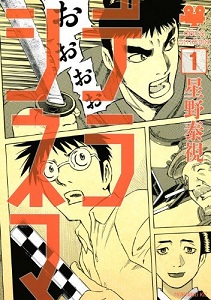 The year is 1953. Japan has begun her recovery from the war, but economic hardship still plagues the people of the country. In these times, the people of Japan chose movie theaters as their escape from the hardships of reality. Imagine this fact: the base salary of a government official was 12,820 yen per year. At the time, a 2 liter bottle of beer was 107 yen, while a movie ticket was 125 yen. Yet, every year, 1 billion people visit the theaters to follow the magic of the movies.

Kudou Takeru, a freshman actor, and Kazama Shinichiro, a freshman director, both delve into this booming industry to pursue what they love. Their ambitions are rooted in a past promise made during the war, a promise of uncompromising pursuit of a "real" cinema. They aim to bring life to the "fake" and glamorous status quo of the cinema industry, by employing what they believe to be the pure form of theater: realism. [DrCoke]