Like us on Facebook, follow us on Twitter! Check out our new tumblr page. :)
Manga News: Toriko has come to an end; but be sure to swing by and share your favourite moments from the series!
Manhwa & Manhua News: Check out the new Manhwa and Manhua shout-out (March 2016).
Event News: One Piece Awardshas concluded. Check the results Here!
MangaHelpers > Manga > Browse > E.T. - Eiga to Tenshi.
Home
Chapters
Translations
RSS 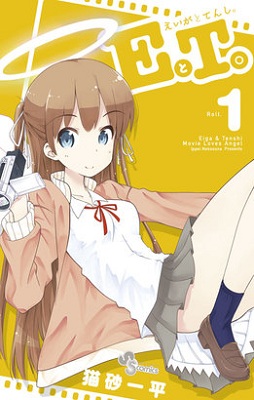 Enoku Daigoro, Tokoro Chacha, and Kiyose Kai were in film-making club together in middle school. Now that they're going to high school together, they're determined to start up a new film-making club for their high school years! On their first day, they learn about another new student, Kotohiki Sakura, a cute girl who is constantly surrounded by crowds of adoring guys. Enoku has more interest in films than girls, but he thinks she and her popularity could be a great addition to the club.

However, when he sees her for the first time, he notices that she has a halo and angel wings! No one else seems to see these things, and his comments about her appearance are taken as a love confession. Enoku and his friends are determined to invite Sakura, and maybe her gatekeeping friend, Yachiyo, to join the club they're about to found and make films together! [tethysdust]