Like us on Facebook, follow us on Twitter! Check out our new tumblr page. :)
Manga News: Toriko has come to an end; but be sure to swing by and share your favourite moments from the series!
Manhwa & Manhua News: Check out the new Manhwa and Manhua shout-out (March 2016).
Event News: One Piece Awardshas concluded. Check the results Here!
MangaHelpers > Manga > Browse > Fatal Frame Zero 3 Comic Anthology
Home
Chapters
Translations
RSS 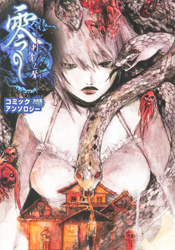 Zero 3 Comic Anthology was published by Kobunsha and released on December 20th 2005.

It contains seven "horror comics" and three parody comics by several different artists. While unofficial, the anthology was supported by Tecmo and the creators, so the stories within it are considered as canon.