Like us on Facebook, follow us on Twitter! Check out our new tumblr page. :)
Manga News: Toriko has come to an end; but be sure to swing by and share your favourite moments from the series!
Manhwa & Manhua News: Check out the new Manhwa and Manhua shout-out (March 2016).
Event News: One Piece Awardshas concluded. Check the results Here!
MangaHelpers > Manga > Browse > Ginga Eiyuu Densetsu
Home
Chapters
Translations
RSS 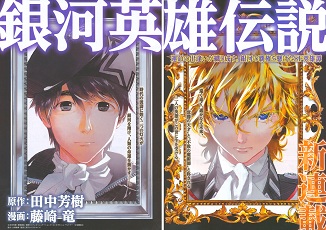 This is a new manga of the story of Legend of Galactic Heroes. It tells the story of a distant future within the Milky Way Galaxy, where the Galactic Empire and the Free Planets Alliance are constantly at war. The story begins with the young Reinhard von Müsel, a boy in the Galactic Empire that lives with his drunk father and his beautiful sister Annerose. He becomes close friends with the boy next door, Sigfried. After his sister is taken to become the Kaiser's concubine, young Reinhard is determined to take down the Empire in order to rescue her. He and his loyal friend Sigfried join the military academy together as the first step in Reinhard's plan. [tethysdust]