Like us on Facebook, follow us on Twitter! Check out our new tumblr page. :)
Manga News: Toriko has come to an end; but be sure to swing by and share your favourite moments from the series!
Manhwa & Manhua News: Check out the new Manhwa and Manhua shout-out (March 2016).
Event News: One Piece Awardshas concluded. Check the results Here!
MangaHelpers > Manga > Browse > Good Job!
Home
Chapters
Translations
RSS 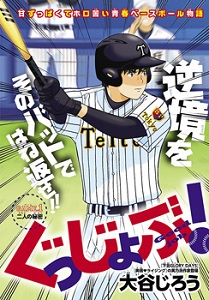 Although Baba Sho is only in high school, he has more responsibilities than any of his classmates. When his classmate and girlfriend, Sumire, gave birth to his baby, the school baseball team he was on stopped becoming a hobby and became the only way he might be able to provide for his family in the future. Without a contract from a professional baseball team, Sho has no idea how he can support his child. Sumire, on the other hand, has had to quit school using the lie that she was ill and hide her child even from her closest friends while living under the roof of her disapproving father. Sho, trying to impress the pro-league scouts, has made him reckless and a selfish player which has started to alienate his team, the same group of people he was great friends with just only a year ago. [vyc]