Like us on Facebook, follow us on Twitter! Check out our new tumblr page. :)
Manga News: Toriko has come to an end; but be sure to swing by and share your favourite moments from the series!
Manhwa & Manhua News: Check out the new Manhwa and Manhua shout-out (March 2016).
Event News: One Piece Awardshas concluded. Check the results Here!
MangaHelpers > Manga > Browse > Haikin
Home
Chapters
Translations
RSS 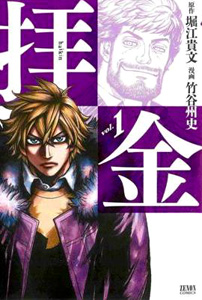 Being poor sucks. Fujita Yusaku came to this realization after meeting “the man,” an incredibly rich businessman, who showed him the power of money that he has never seen before. The women, the respect, the home, and the cars. All of that could be obtained by having money. The man offers to make Yusaku wealthy and he agrees to the deal. The man lends him $20,000 and tells him the secret of starting a successful business. Without knowing what motives the man has behind this deal, Yusaku begins on his journey to become a billionaire. But he may have just signed a contract with the devil. [vyc]