Like us on Facebook, follow us on Twitter! Check out our new tumblr page. :)
Manga News: Toriko has come to an end; but be sure to swing by and share your favourite moments from the series!
Manhwa & Manhua News: Check out the new Manhwa and Manhua shout-out (March 2016).
Event News: One Piece Awardshas concluded. Check the results Here!
MangaHelpers > Manga > Browse > Haruka Suitact!
Home
Chapters
Translations
RSS 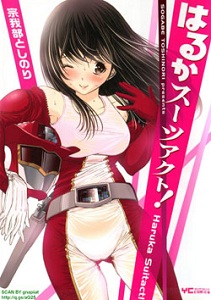 Mutou Haruka is excited to be the new red-suited ranger in a superhero program. She's especially excited to be around the pink ranger actress she admires, Saotome Hikari. However, when they change clothes in the same room, she finds out that Saotome is really a man! Saotome is none too impressed with Haruka's acting, but he's impressed enough with her body to get her to have sex with him. However, Saotome is also sleeping with a villain in the show, a dominating gravure idol who's playing a villain. Haruka's time as a suited superhero is not turning out like she expected! [tethysdust]