Like us on Facebook, follow us on Twitter! Check out our new tumblr page. :)
Manga News: Toriko has come to an end; but be sure to swing by and share your favourite moments from the series!
Manhwa & Manhua News: Check out the new Manhwa and Manhua shout-out (March 2016).
Event News: One Piece Awardshas concluded. Check the results Here!
MangaHelpers > Manga > Browse > Himichu no Ayako-sama
Home
Chapters
Translations
RSS 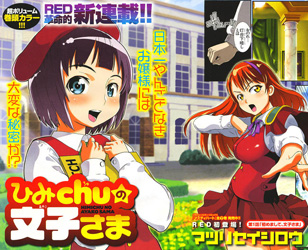 Teishu Academy is a school for the wealthy, high classed students that the upperclassmen can offer. Being at such high class the Socie, a school group that is almost like security, keeps a lookout for anyone who tries to bring in any portion of lower class culture. An example of this is an anime based keychain, which is a Rank 1 unacceptable item on campus ground. Those who break the rules are then crucified and called "Criminaes" and are set to be shamed by the public. Due to an increase in the number of such Criminaes, Hajime, the Shvarie du la Fleur of the Socie, has announced that the Socie will conduct unscheduled searches through each student's bag. A new student, Rentarou, is shocked at this since he accidentally had anime related material hidden inside his bag. He desperately tries to run from the Socie, but gets caught by the Socie leader herself! But instead of a severe punishment, the Socie leader, Ayako, decides to have Rentarou join her in creating a doujin game. Such a hypocritical school..... [Mamo]