Like us on Facebook, follow us on Twitter! Check out our new tumblr page. :)
Manga News: Toriko has come to an end; but be sure to swing by and share your favourite moments from the series!
Manhwa & Manhua News: Check out the new Manhwa and Manhua shout-out (March 2016).
Event News: One Piece Awardshas concluded. Check the results Here!
MangaHelpers > Manga > Browse > Ichabad no Seikatsu
Home
Chapters
Translations
RSS 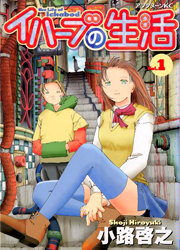 Ichabod is a child of two lesbians, Mary and Ellie, and his mothers have made it no secret of their disappointment at his birth. They had been hoping for a daughter, not a son. Now Ellie has run off, so their family is reduced to just Ichabod and Mary. He believes the legendary thief, Mushu, is his father, due to the blue birthmark they both have on their neck. In the absence of a father figure in his life, he imagines conversations with Mushu while gazing at the wanted posters.

One day, in a bid for sympathy and attention from his critical mother, Ichabod injures himself, and ends up in the hospital. Once there, he befriends his neighbor, who happens to be an arrested jewel thief, Ganzu, from a notorious criminal group. When he learns that his new friend might have information about Mushu, he volunteers as a hostage to help him escape. Now Ichabod is off on his adventure with Ganzu and his group and who knows what he will find! [tethysdust]