Like us on Facebook, follow us on Twitter! Check out our new tumblr page. :)
Manga News: Toriko has come to an end; but be sure to swing by and share your favourite moments from the series!
Manhwa & Manhua News: Check out the new Manhwa and Manhua shout-out (March 2016).
Event News: One Piece Awardshas concluded. Check the results Here!
MangaHelpers > Manga > Browse > Ikebukuro West Gate Park R
Home
Chapters
Translations
RSS 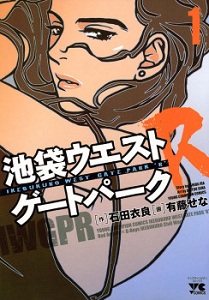 This is another addition to the popular Ikebukuro West Gate Park universe, which features the young man Majima Makoto. Makoto lives in an area that is known for gang problems and delinquency, and it is currently dominated by two gangs. Their colors are black and red, and they are known as the G-boys and the R-angels, respectively. Makoto is not a member of either, but his old friend from school, Takashi, is the head of the G-boys gang. The head of the R-angels, which is a gang that only formed in the past year, is a mysterious dancer known as Kyouichi.

One day, Makoto is approached by a young video journalist named Matsui Kana. Kana convinces Makoto to be her guide in IWGP as she films for a documentary about the area. Kana may end up getting more than she bargained for, both in Makoto and in the dangerous area of IWGP. [tethysdust]