Like us on Facebook, follow us on Twitter! Check out our new tumblr page. :)
Manga News: Toriko has come to an end; but be sure to swing by and share your favourite moments from the series!
Manhwa & Manhua News: Check out the new Manhwa and Manhua shout-out (March 2016).
Event News: One Piece Awardshas concluded. Check the results Here!
MangaHelpers > Manga > Browse > Ikebukurohatsu, Zensekai Yuki!
Home
Chapters
Translations
RSS 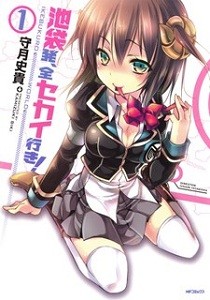 It is still a shock to Saga Shigekata that he is standing at Ikebukuro Krea Academy, a relatively new school with a very particular curriculum. He was supposed to be attending a normal high school, but when his parents discovered the sketches he was drawing, they sent him here. This school is relatively new and is known as the otaku school where aspiring manga artists gather to learn about creating their own masterpiece. Shigekata meets a fellow first year named Miyakawa Hinari who seems to be in a cosplay costume but later finds out that not only is she Shigekata’s classmate, she is the president and founder of Krea Academy. He starts making new friends that inspire him to produce artwork with a lot of passion. [vyc]