Like us on Facebook, follow us on Twitter! Check out our new tumblr page. :)
Manga News: Toriko has come to an end; but be sure to swing by and share your favourite moments from the series!
Manhwa & Manhua News: Check out the new Manhwa and Manhua shout-out (March 2016).
Event News: One Piece Awardshas concluded. Check the results Here!
MangaHelpers > Manga > Browse > Ikusa x Koi
Home
Chapters
Translations
RSS 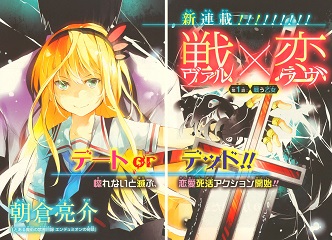 Akutsu Takuma wants nothing more than to be left alone, to live and study in peace. He has a terrifying face, which has prevented him from making friends and earned him the nickname "Akuma" (devil). However, he is satisfied with being alone and spending all of his time learning, hoping to become the good person his late mother saw in him.

All of this changes when he gets involved with the nine Saotome girls, who are Valkyries. Takuma is called by Odin to pair with them to protect the world from demons and the threat of total destruction. The Valkyries' power comes from love, and so now he must live with them and try to become closer to them. To start with, they prioritize his intimacy with the strongest Valkyrie, Natsuki. Will he and the Saotome women be able to save the world? [tethysdust]