Like us on Facebook, follow us on Twitter! Check out our new tumblr page. :)
Manga News: Toriko has come to an end; but be sure to swing by and share your favourite moments from the series!
Manhwa & Manhua News: Check out the new Manhwa and Manhua shout-out (March 2016).
Event News: One Piece Awardshas concluded. Check the results Here!
MangaHelpers > Manga > Browse > Crime Scene Investigation
Home
Chapters
Translations
RSS 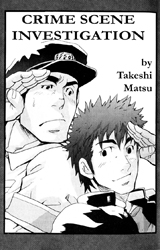 A young officer laments about the fact nothing happen in his precinct when a teen boy comes in says he was molested in the park. But is his story a ploy for something else?