Like us on Facebook, follow us on Twitter! Check out our new tumblr page. :)
Manga News: Toriko has come to an end; but be sure to swing by and share your favourite moments from the series!
Manhwa & Manhua News: Check out the new Manhwa and Manhua shout-out (March 2016).
Event News: One Piece Awardshas concluded. Check the results Here!
MangaHelpers > Manga > Browse > Ishi no Hana
Home
Chapters
Translations
RSS 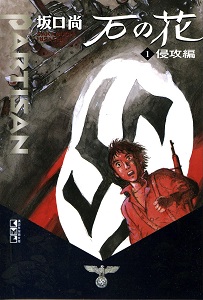 In early 1941, Krilo is living a quiet life in his home town in Yugoslavia. He's a bit of a problem student and is influenced by the political ideas brought back by his older brother Ivan, a college student in Zagreb. Even though there are news and rumors of Nazi Germany on the move, it seems impossible that war could come to their peaceful village. In late March, the Yugoslavian government signed the Tripartite Treaty with Hitler, but the government fell to a coup d'etat only days later. In early April, Yugoslavia was invaded by Nazi Germany.

That invasion shattered Krilo's peaceful life. Countless people in the village are killed by the German invasion, and the others are rounded up. Krilo evades capture, but has no idea what to do next. He sets out for Zagreb in search of his older brother. Krilo's childhood friend, Fi, on the other hand, was among those who were rounded up. She faces a whole different kind of adversity, as she is processed with the others by the Nazi military. The invasion may be over, but the fight for Yugoslavia has just begun. [tethysdust]