Like us on Facebook, follow us on Twitter! Check out our new tumblr page. :)
Manga News: Toriko has come to an end; but be sure to swing by and share your favourite moments from the series!
Manhwa & Manhua News: Check out the new Manhwa and Manhua shout-out (March 2016).
Event News: One Piece Awardshas concluded. Check the results Here!
MangaHelpers > Manga > Browse > Joou no Hana
Home
Chapters
Translations
RSS 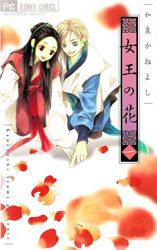 In the country of ‘Aah,’ the king had two wives. The first wife was sickly but had an eight-year-old daughter while the second wife gives birth to a son and wants him to be king. The princess is friends with a slave named Hakusei who is treated like a beast due to his unusual golden hair and sky colored eyes and she always protects him whenever the prince picks on him.

Soon after, her mother dies from food poisoning and when she finds out the princess vows to come back home to take revenge on whoever killed her mom! Who killed her mom and how will she take revenge?! [Kohakuboshi]