Like us on Facebook, follow us on Twitter! Check out our new tumblr page. :)
Manga News: Toriko has come to an end; but be sure to swing by and share your favourite moments from the series!
Manhwa & Manhua News: Check out the new Manhwa and Manhua shout-out (March 2016).
Event News: One Piece Awardshas concluded. Check the results Here!
MangaHelpers > Manga > Browse > Kyou Kara Hitman
Home
Chapters
Translations
RSS 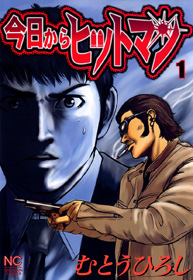 Inaba Toukichi is a regular 34-year-old white collar worker who just got married to Misako six months ago. He was living a normal life until he gets involved in the death of a world famous assassin nicknamed “Dual Gun.” In order to save his normal life, Toukichi has no choice but to assume the role as the second generation Dual Gun. Although severely inexperienced, with the help of a powerful organization that can acquire him anything and the original Dual Gun’s girlfriend, Chinatsu, Toukichi becomes an assassin. As his normal life would be destroyed if anyone, including if his wife found out about his involvement with the dark side of society, Toukichi has to deal with his regular life as a salesman and more importantly, not be killed at each of his missions. [vyc]