Like us on Facebook, follow us on Twitter! Check out our new tumblr page. :)
Manga News: Toriko has come to an end; but be sure to swing by and share your favourite moments from the series!
Manhwa & Manhua News: Check out the new Manhwa and Manhua shout-out (March 2016).
Event News: One Piece Awardshas concluded. Check the results Here!
MangaHelpers > Manga > Browse > M4: The Society for the Study of SVG
Home
Chapters
Translations
RSS

M4: The Society for the Study of SVG 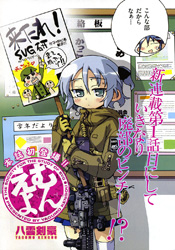 Gag manga by the character designer of the animation "Kujibiki Unbalance" and the game "Muvluv." The subtitle "The Society for the Study of SVG" is a parody of the subtitle of the popular series "Genshiken: The Society for the Study of Modern Visual Culture," a similar manga about a university anime club, authored by the creator of "Kujibiki Unbalance." The title logo is a parody of that used by the popular gag manga "Minamike"

The Society for the Study of SVG (Survival Games) is in danger of being demolished! They must recruit a new member in order to meet the minimum requirements, but their habit of carrying around military-like weaponry is kind of off-putting to potential recruits. Luckily, the class representative is willing to help out. Will the club and their newest member survive? [tethysdust]