Like us on Facebook, follow us on Twitter! Check out our new tumblr page. :)
Manga News: Toriko has come to an end; but be sure to swing by and share your favourite moments from the series!
Manhwa & Manhua News: Check out the new Manhwa and Manhua shout-out (March 2016).
Event News: One Piece Awardshas concluded. Check the results Here!
MangaHelpers > Manga > Browse > Maid wa Miracle
Home
Chapters
Translations
RSS 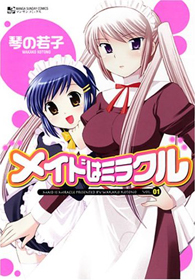 Seiji is a typical college student with girls on his mind. He gets into a car accident that leaves both his hands broken and in a cast for several months. His parents and his friend both coincidently send him a urine bottle to use while he is injured but to Seiji’s surprise, a maid appears from each of the gifts. Mint is the younger looking, outgoing and happy maid and Mei is the older but shy and uptight girl. They both claim that they come from a different world and they are here to serve Seiji until he recovers. Both Mint and Mei take care of Seiji’s “private time” urges as both his hands are unusable. Instead of choosing one maid to serve him, he chooses to have both of the girls help him, much to Seiji’s delight. [vyc]