Like us on Facebook, follow us on Twitter! Check out our new tumblr page. :)
Manga News: Toriko has come to an end; but be sure to swing by and share your favourite moments from the series!
Manhwa & Manhua News: Check out the new Manhwa and Manhua shout-out (March 2016).
Event News: One Piece Awardshas concluded. Check the results Here!
MangaHelpers > Manga > Browse > Muteki no Hito
Home
Chapters
Translations
RSS 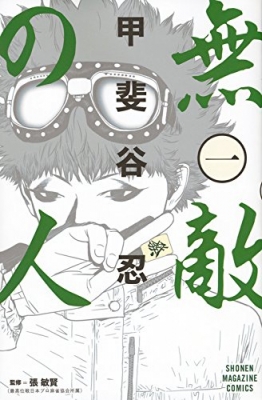 Sonokawa Junpei is a 19-year-old who works multiple part-time jobs to support his little sister and unwell mother. One day, he discovers a major cash prize at the company where he works as a janitor, V Line, for anyone who can discover the cheating method of a major champion (a user named 'M') of their online mahjong game. As it happens, this same 'M' shows up at the family restaurant where Junpei also works, and Junpei jumps at the opportunity to get money for his family!

His strategy is to befriend 'M' (whose name is Mizuki) and uncover his cheating method. When he goes to Mizuki's house, though, it is clear that the befriending part is going to be a challenge. He learns from Mizuki's older sister that he suffered head trauma in the accident that killed their parents. Since then, he has lacked the ability to experience emotion, though he has also gained amazing powers of memory. He spends all of his time playing--and winning--online mahjong. Now, Junpei wants to genuinely become Mizuki's friend, and to help prove that he is a genius, not a cheater! [tethysdust]