Like us on Facebook, follow us on Twitter! Check out our new tumblr page. :)
Manga News: Toriko has come to an end; but be sure to swing by and share your favourite moments from the series!
Manhwa & Manhua News: Check out the new Manhwa and Manhua shout-out (March 2016).
Event News: One Piece Awardshas concluded. Check the results Here!
MangaHelpers > Manga > Browse > Nagisa-chan no Kareshi
Home
Chapters
Translations
RSS 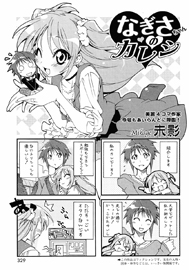 Nagisa is excited about her first boyfriend ever, who she met in college, Chihiro. He is cool, good looking and everything she can hope for except for one thing: he is an otaku. You wouldn’t be able to tell by just looking at Chihiro as he doesn’t fit the stereotype but don’t be fooled by his appearance as he is just as hardcore as the others. But Nagisa is so in love with him that she accepts him as a whole, good and bad. She tries to understand his likes so that they can grow closer and little by little, Nagisa starts to change. [vyc]