Like us on Facebook, follow us on Twitter! Check out our new tumblr page. :)
Manga News: Toriko has come to an end; but be sure to swing by and share your favourite moments from the series!
Manhwa & Manhua News: Check out the new Manhwa and Manhua shout-out (March 2016).
Event News: One Piece Awardshas concluded. Check the results Here!
MangaHelpers > Manga > Browse > Nami Uchi Kiwa no Muromi-san (Second Series)
Home
Chapters
Translations
RSS 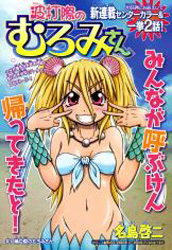 The manga revolves about a mermaid named Muromi, her travels and her quirky personality. She speaks with a Hakata dialect (from Fukuoka prefecture, which is where the artist/author is from). In fact, her name originates from Muromi River, the birthplace of the artist. She thinks sea water fish are better than freshwater fish. She has a sweet tooth and loves sake. She's also said to have been living for thousands of years (although she has the appearance of a teenage girl with a fishtail).

Join Muromi on her adventure, as she gets caught in high school student Takuro Mukojima's fishing nets, as she meets more friends, new and old, and enjoy their weird but hilarious conversations. Or, you could just watch her bother Takuro on his fishing days with lame gags, just for laughs! [6gatsu]