Like us on Facebook, follow us on Twitter! Check out our new tumblr page. :)
Manga News: Toriko has come to an end; but be sure to swing by and share your favourite moments from the series!
Manhwa & Manhua News: Check out the new Manhwa and Manhua shout-out (March 2016).
Event News: One Piece Awardshas concluded. Check the results Here!
MangaHelpers > Manga > Browse > No Guns Life
Home
Chapters
Translations
RSS 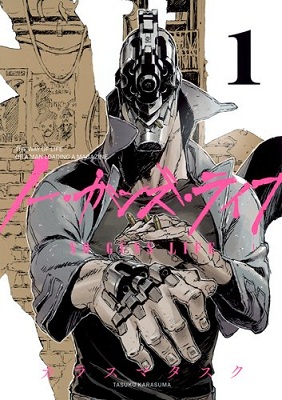 After the war, there are many "Extends" in the city, people whose bodies were modified to make them into dangerous weapons. Inui Juuzou is one of them, and he has no memories of his life and body before his head was transformed into a gun. Strangely enough, his head-gun is designed so that only someone behind him can pull the trigger. Juuzou makes a living by taking on cases involving Extends in the city, and he is assisted by Mary, an intelligent young woman that he has taken under his protection. [tethysdust]